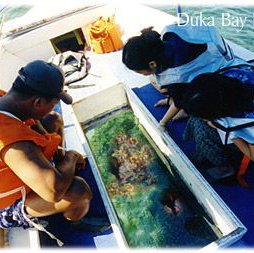 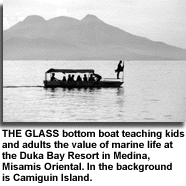 Do you want to see the underwater world without spending tens of thousands of pesos on scuba gear or without undergoing weeks of training before becoming a licensed diver?

Well, I and my family just did that and we spent only Php200* to enjoy the sight we usually see only on Discovery Channel, or on our kids' ''Magic School Bus Explores the Ocean'' CD-ROM.

Thanks to enterprising individuals and environmentalists here, this sight usually reserved only for the rich and the daring could now be accessed by ordinary mortals, kids included.

Simple, actually, as the Duka Bay Resort people have done--put a glass on the floor of a small boat, the glass big enough to accommodate six to eight people and with enough space to view the sea below.

The glass doesn't have to be very thick. Durer Abrea, 32, our sea tour guide, said it was only one-fourth inch thick. But he vouched that it was safe because of the way they designed the boat and the placement of the glass. ''It's just like putting glass in the bottom of a salbabida (inflated interior tire),'' he explained. ''Even if the glass breaks, no water would come in.''

Although the underwater world wasn't foremost in my mind when we chartered the ''Glass Bottom'' boat for a 30-minute ride, it turned out to be one of the most exciting experiences of my life. We ended up shouting quite often while appreciating the beautiful sea creatures and coral reef formations below.

I did some snorkeling with my cousins during high school in what was left of my hometown's (Iligan) coral reefs, and boy did I enjoy watching the lion fish, seahorses and many more marine creatures. But the sight we experienced here in the fish sanctuary of Medina--one of the famous diving spots in Mindanao--was just so wonderful I felt like a child again exploring and enjoying nature.

Feel of a scuba diver

In fact, I had to put my face so close to the glass to get the feel of a scuba diver. ''Wow, angel fish!'' ''Clown fish!'' ''Wow! Sea snake!'' When I boarded the boat again with adult cousins of the Maquiso clan from neighboring Gingoog City, the yelling was even louder. We even invented names for the fish which are unknown to us --electric blue fish, vertical fish, tiger fish. And of course there were different varieties of star fish, too, and kitong big enough for dinner.

But the loudest yell came when a round-shaped sea turtle swam underneath, so fleeting a moment that we enjoyed the sight for only a couple of seconds. It was about only a foot wide. Abrea said they see the turtle only very rarely. ''It usually means good luck,'' he added.

Scuba diving, they say, is still much better because you can really observe the exotic fish and other sea creatures up close and much longer.

But I have plans for our next trip here--we'll ask the boat operator to just stop the engine and let the boat float above the coral reefs. This way, we could enjoy nature's wonder better.

And how I'd love to hear my wife's lecture on marine life to my kids Kara and Arkay (and to me, too). Miriam, who took zoology in Diliman as her pre-med course, does that every time we show the kids nature's mysteries.

Which exactly was the main reason why Duka Bay Resort is offering the boat ride--to educate the people on how to preserve nature by showing them its beauty. Filbert Reyes, 28, the boat operator, said students from nearby colleges even get free rides as long as the school arranges with the resort management beforehand.

''It used to be much more beautiful here,'' said Abrea, who grew up in the neighborhood, supported by his father who earned a living collecting shells.

Abrea and Reyes said the Duka Bay Resort started to show resolve in protecting the sanctuary about three months ago, when the owner visited the area. They said he was so disgusted at the state of the coral reefs, which he enjoyed during his younger years that he urged his son, who is managing the family-run business, to do something about it.

Thus, starting last June 17, the resort came up with the glass bottom boat business. The income they earn from the boat ride is used for a 24-hour monitoring operation to ensure that the fish sanctuary is protected. The municipal council, too, passed a resolution a month later, prohibiting certain kinds of fishing methods within the sanctuary.