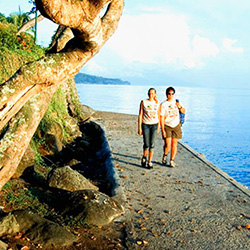 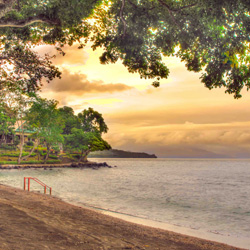 Away from Metro Manila's maddening headlines. Away from appointments. Away from snarling traffic hurdles and those swarms of jeepneys.

Although jeepneys may have prayers for divine protection emblazoned across their rainbow colored metallic bodies, I cried out horror-stricken as "The Virgin", "Santo Nino", and "Jesus, Save Us" aimed their bumper grills at me during the rush hour. As an American tourist crossing the street in Makati, I felt that I would soon become an endangered species. Simply, I needed an escape. I needed space to maneuver. Exasperated, I fled south to Mindanao looking for bliss. I discovered my Eden at Duka Bay Resort in the town of Medina, Misamis Oriental.

Disembarking on the ship "Our Lady of Banneux" in Nasipit, Agusan del Norte, my host picked me up. However, at dockside, an air-conditioned bus to Duka Bay's doorstep is available.

The two-and-a-half hour ride on the National Highway was most thrilling. The westward journey tips the northern Mindanao coast in an uphill ride along summits overlooking the deep blue Bohol Sea to the north and the green palmy version of the Rocky Mountains to the south. Along the way, thong-sandaled women with welcoming brown eyes as large as coconuts scurried about with baskets of golden, yellow mangoes balanced on their heads.

At Duka Bay Resort, an eagle's view captures the beauty of three spacious cottages in a mix of Japanese and Muslim style architecture, the glass-like Bohol Sea at a far distance with its therapeutic sounds, and the expansive surrounding mountains. Swimmers, sunbathers, and picnickers dot the beach. The rim of Duka Bay is edged with jutting, jet-black volcanic boulders, having landed here like bullets following a thirty-mile express bull's eye from one of seven nearby volcanoes, one of which is still active.

While walking down the crushed coral path, I heard the swaying swish- swish sound of the wind against the unfurling foliage of the sturdy magtalisay and baok-baok trees.

After checking in, I walked uphill to my cottage. The most expensive cottage is the Ambassador suite which rents four people per day - a bargain compared with the Shangri La in Mactan. The cottage has glass sliding doors that open into a nine by twenty-foot deck where I stretched out sipping my coffee and enjoying the most splendid view of the sea and the rising sun on the horizon. The room is very clean and airy and has first class bathroom facilities.

Scanning the menu, the eight entrees seemed ample for my weekend. The Filipino breakfast with fragrant garlic fried rice was my favorite. I also learned that the menu is constantly updated and improved.

Following breakfast, I examined the available recreational activities which featured sailing, snorkeling, kayaking, and viewing undersea coral life from a glass bottom boat, the resort's very own underwater observatory. My son, Max, raced me to the beach and constructed a large sand castle equipped to withstand monsoon forces. But Max appeared to have more sand on his body than in the castle.

For those feeling intrepid and if you brought along your scuba gear, experienced divers can explore the majestic coral reefs about two hundred yards from shore and forty feet below the sea's surface. Dive Master Lois Marie Lugod who likes to be called Cookie greets the divers. "Diving in these waters is only for the experienced," she says. Hailing from a family of divers, Cookie is an expert diver, having logged over twenty years in a wet suit under oceans and regional waters. She provides the diving enthusiasts with detailed safety instructions along with the environmental concerns to protect the coral reefs from destruction.

Cookie states, "One advantage to diving in these waters of Duka Bay is that no sharks have been reported and we have the most beautiful coral and giant sea turtles." She particularly enjoys diving at night while looking up through the waters at the stars sparkling overhead.

After a day of swimming, I met the third generation owner of Duka Bay Resort and his wife. He greets every visitor with a hearty handshake and explains the history behind Duka Bay, which contains the family's ancestral home and glistening white beach property that was acquired by his grandmother as a place of recreation. Grandmother planted the surrounding magtalisay and baok-baok trees forty years ago. These trees which dart the beach area have now tripled in size and provide shade.

I checked out of Duka Bay at twelve noon, Sunday. I shook hands with the owners and their children.

Duka means sleepy in the dialect. As for me, it means unspoiled and serene. It is nurtured by family hands and not by the impersonal high-tech management of global hotel corporations. While packing my bags in the van, I turned to the owner, smiling and thanking him for a great time. In my best General MacArthur impersonation, I said, "I SHALL RETURN!"